Contact us
Temporary Works: a crucial engineering stage for a safe working environment

They say that you can’t build a great building on weak foundations. At Kaymac Marine, we know that this saying is relevant to our business. We work by the idea that successful permanent structures are not solid unless they’ve also had successful temporary works were innitally installed. Without a qualified civil engineer and qualified temporary works coordinators completing accurate, detailed designs and planning for these non-permanent works, the entire permanent project is at risk of failing – mainly when there is tidal or fluvial water involved.

What are temporary works?

Temporary works are the stage of a construction project which allows a permanent structure to be built; for example, a team building a bridge would need temporary measures such as excavation, scaffolding, and props, in order for the permanent structure to be created. Without solid temporary works that accommodate the precise building of the bridge, the entire project would be at risk.

Usually, these part-time measures are removed at the end of a project, known as shoring. Shoring is when a prop is used to make a structure safe and is then removed at the end of its usage. In some cases, however, the temporary works are incorporated into the permanent structure to make it structurally more secure and allow for ease of potential future damage repairs, decoration, or addition to the structure.

Why are temporary works so important?

It’s incorrect to assume that temporary works can just be thrown together to get the job done, particularly if tidal or fluvial water flow is involved. In fact, the same care and attention to detail must be applied to the temporary works as they are to the final long-lasting construction. As well as the effects on the permanent structure if the temporary works constructed are poorly designed, and badly planned can also cause injury or harm to the work team, cause project delays, and severely impact the project’s overall budget.

Why employ Kaymac Marine for these temporary services?

What experience does Kaymac Marine have in temporary safety?

While we have successfully provided temporary works and continue to do so for our clients across all of the UK, a great example of our team’s precision engineering was at Prioress Mill Raw Water Pumping Station in Rhadyr, Monmouthshire.

Prioress Mill had been deemed by experts as not being fit for purpose and was presenting an unacceptable risk to the environment and being unable to keep up with consumer demands. The operational constraints of the existing watercourse meant that a new pumping mill was to be constructed from scratch; the experts at Kaymac Marine were called in to create a dry working area for the project’s construction team.

Having surveyed the area, looking at access for machinery, historical river level data, and potential flood event risks, Kaymac’s in-house coordinators concluded that the dredged sand dumpy bag option would be much more robust. A temporary works design could be carried out to show that it would be suitable to withstand a more significant water depth than the other options considered. Despite the dredged sand dumpy bag option taking longer to install and remove than the other options, it also removed a significant portion of the risk, allowing the construction team to work safely and deliver the project on time and within budget. In fact, feedback from the client was highly positive and described Kaymac operatives as ‘star performers.’ 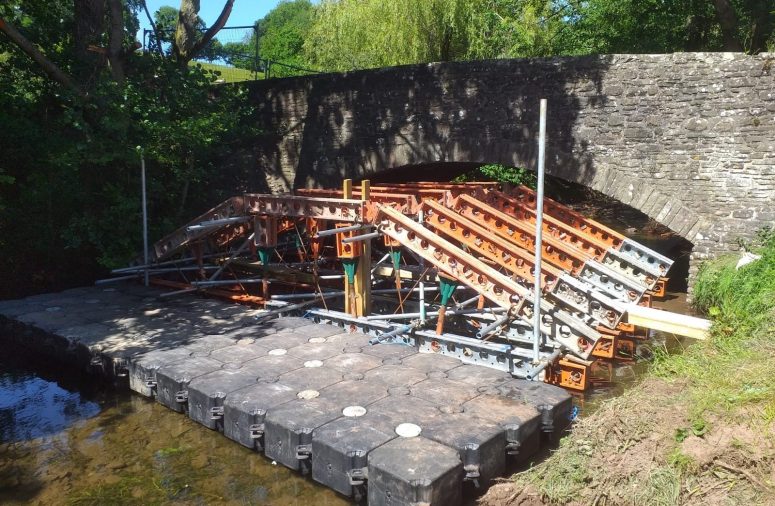