The existing Welsh Water intake structure at Wye Transfer was to be upgraded to accommodate 2 new Hydrolox screens.  To install the designed steel support system, the existing structure required adaptation, which was carried out through diving operations.

Kaymac were commissioned by Black & Veatch Ltd to carry out first demolition works and later assembly works, to the existing intake structure that is situated on the River Wye.  The intake structure required updating so that new Hydrolox screens could be installed.  The works were carried out through diving operations within the river, with the watercourse itself being very susceptible to high ranges of flows and levels due to the location and size of the catchment area.

The existing reinforced concrete wing and central walls needed to be cut back through localised demolition using hydraulic and pneumatic tools.  To prevent any suspended solids as a result of the works from entering the watercourse, a silt curtain was erected around the working area as shown in the photographs.  Due to the poor road access at the site, a tower crane was required for use in-case of an emergency so as to be able to recover an incapacitated diver using a man riding basket.

Once removed, the new concrete wall profiles allowed the installation of a pre-fabricated steel support system for the Hydrolox screens.  The steel column and beam members were assembled where possible on the surface and then lifted into position using the crane.  Once in position, they were checked for level and orientation by the diver before being drilled and fixed to the structure above and below the waterline.  Underwater grouting works were also carried out to allow the fixing of these members to the specified design criteria.

As the works progressed, there were various changes to the scope of the works during the contract, however, these changes caused no time or cost delays. The project was delivered on time and to budget. 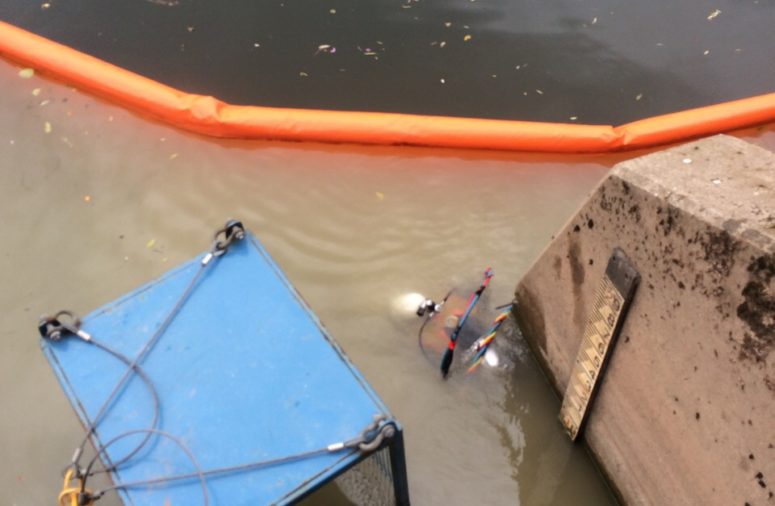