Contact us
Filton Flood Alleviation Scheme
Kaymac were commissioned to extend 2no culverts that run perpendicular to the track beneath the railway line at New Road, Bristol.

The works involved extending both culverts by approximately 4m upstream.   As the works are within a watercourse, Kaymac consulted closely with the Environment Agency as the watercourse needed to be temporarily diverted twice to carry out the works in a safe and responsible manner.  An access road and piped causeway crossing of clean stone was constructed from the site level to the edge of the watercourse to suitable plant and labour access.    The piped causeway would allow plant access across the watercourse without tracking through and disturbing the sediment potentially causing a pollution incident.

The existing weir was then cut upstream to suit the existing cross sectional profile of the watercourse (plus some allowance for flood conditions).    The culvert was extended using pre-cast concrete sections,  the steelwork and formwork were then installed and the mass and structural concrete pours were completed.

The culvert was extended using a HDPE pipe section.  Again, steelwork and formwork were installed and the mass and structural pours were completed.  Whilst the brook could be controlled, Kaymac operatives installed river bank protection which included gabion baskets and reno mattresses.  Upon completion, the ramp and piped causeway crossing were removed and the cut weir repaired. The design also required the construction of a RC retaining wall to span along the top of both culverts.  With poor access, the steelwork and formwork were installed to the newly cast slab and the retaining wall constructed using a boom pump to place the concrete. The project was completed on program and under budget. 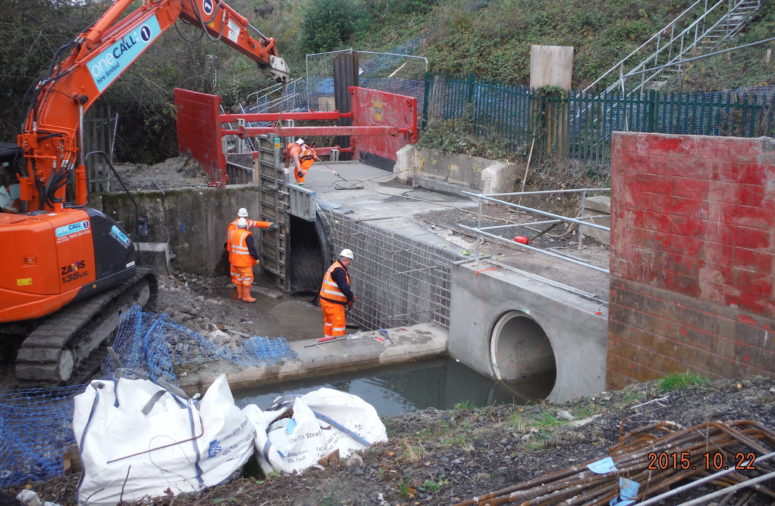