In late July 2020, Kaymac were contacted by our client to assist with developing a proposal that would permit the safe installation of a fabric formwork scour protection system to the abutment of a railway bridge, near Inverness, Scotland.

The client had secured the scheme and planned to undertake the works in dry conditions using a portable frame dam system; however, it became evident that this would not be feasible given the approximate river depth of 3.0m in certain sections. Following the site visit, Kaymac’s engineers developed an alternative proposal which would permit the undertaking of the works through diving operations, without adapting the detailed permanent works design which would have likely resulted in the works being delayed until the following Spring, 2021.

Kaymac were confident that they could deliver a bespoke underwater solution and further developed the proposal through close liaison with the client’s permanent works designer and the manufacturer of the fabric formwork mattress system. Kaymac were able to illustrate to the client that a number of value engineering principles could be implemented, including utilising the existing rock armour material that was on site and due to be used for the permanent works, into forming a temporary bund that would protect our diving operatives from the river flows during installation.

Through assessing and interpreting the historic river level data, Kaymac developed the temporary works solution so that it would be set at a height that would offer maximum working opportunities with minimum down time due to adverse weather; whilst also ensuring that it would not cause an obstruction resulting in a heightened flood risk upstream of the works. The construction proposal together with our detailed pollution mitigation methodology were documented and issued to SEPA as an amendment to the client’s original environmental permit application before being duly approved.

All elements of the works, including the installation of the temporary and permanent works through diving operations were undertaken by Kaymac’s directly employed workforce. Our delivery management team included a qualified and experienced on-site project agent, together with regular visits from one of our project engineers to ensure that the works were undertaken in accordance with the detailed design.

Following the successful completion of the permanent works and subsequent removal of the temporary measures, the worksite was handed back to the client, two weeks ahead of programme. 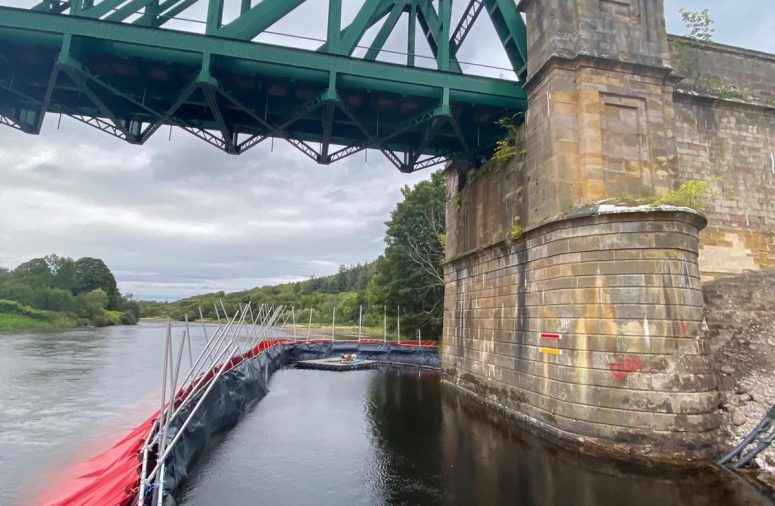