Rastrick Bridge is a three span under-bridge which carries the A643 over the River Calder. The structure is constructed from bonded masonry abutments and piers that support bonded masonry arches. Following the severe flood conditions experienced across the U.K in early 2020, critical safety checks to infrastructure have been of paramount importance. In this particular case, the flooding had transported a shipping container causing it to become wedged against the upstream face of the bridge structure which could not be removed until the river levels had subsided. Its wedged position had caused severe scouring to occur to the affected pier.

Following its removal, the asset owners undertook an underwater inspection which identified a number of areas of concern and resulted in the immediate closure of the structure until it could be fully assessed and any structural concerns rectified.

The road closure was causing heavy congestion and traffic issues, with the asset owners under considerable increasing pressure from the public to rectify the situation and re-open the bridge. The scour survey was undertaken by another diving contractor and once the client had received the findings, they were left to then try and determine an appropriate method of repair. It was at this time that Kaymac were invited to interpretative the survey results, develop a proposal and further, give the client the confidence that they could deliver a bespoke underwater repair solution in a manner that would allow the bridge to be reopened with due haste.

Following a site visit, Kaymac’s engineers developed the proposal which would permit the works to be undertaken through diving operations, making use of Kaymac’s own steel modular pontoon system. Kaymac also had to assure both the client and the Environment Agency that the proposed construction methodology would ensure that no pollution or suspended particulates (as a result of the works being undertaken in wet conditions), from entering the watercourse and being dispersed downstream.

Through close and open liaison with the Environment Agency, Kaymac were able to obtain the relative flood risk activity permits quickly, allowing the works to be undertaken within a week of the initial applications. Concurrently, Kaymac sourced the required materials and obtained the relative buoyancy calculation checks for the intended floating plant, ensuring that once the EA permit was received, works could immediately commence, thus limiting the overall road closure duration.

Upon mobilising to site, Kaymac installed a temporary access ramp to safely construct the pontoon system within the watercourse. Through diving operations and with the assistance of the excavator, the loose bed material around the pier was excavated to the required formation level, before formwork was erected by our divers.

A concrete boom pump positioned off the bridge (to  ensure no additional loading was applied) was used to place an approved underwater concrete mix, essentially filling the scour hole and stabilising the structure. The excavator was then used to place rock armour around the cutwater of the pier to offer further protection against future scour. All elements of the works, including the installation of the temporary and permanent works through diving operations were undertaken by Kaymac’s directly employed workforce.

We understand that undertaking the works below water can also introduces a host of testing and quality concerns for our clients, however, with Kaymac’s vast experience in undertaking these types of projects across the UK, a detailed Inspection & Test Plan was documented and further, adhered to on site to ensure compliance at every phase of the works. 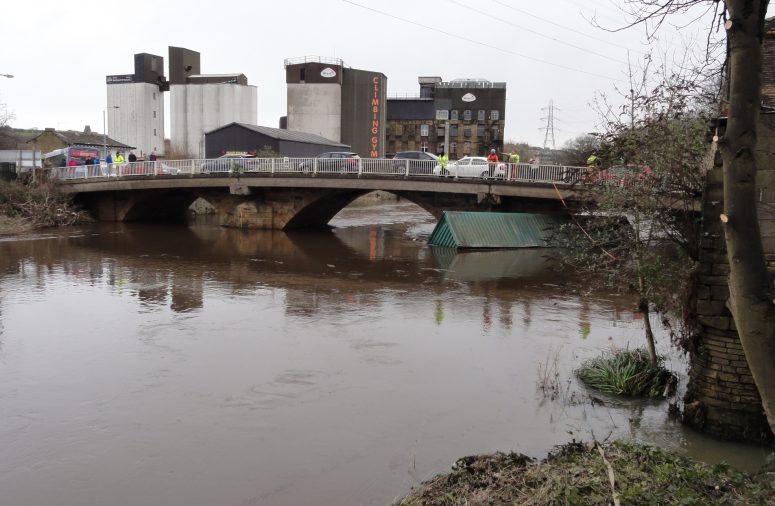