Kaymacs’ specialist experience was commissioned to design and install a bulk gravel bund dam temporary works system. The Dam had to be designed specifically to hold back the river and create a dry working area over an eight month period; for the proposed duration of the permanent works construction.

The current Prioress Mill Raw Water Pumping Station had been evaluated by operators as being inefficient and inadequate to keep up with current consumer demands, and presented an unacceptable risk to the security of supply to the reservoir it supplies. It had been determined that a refurbishment of the existing station to meet the demands was not possible within the operational constraints of the station, and as such a new Raw Water Pumping Station facility was required. To accommodate these works within the watercourse Kaymacs’ specialist experience was contracted to create the dry working area.

Kaymac initially looked at using alternative methods to create the dry working area such as sheet pilling and a portable dam system. Both methods had been used with success on previous projects, but on this particular project the use of sheet pilling was immediately thrown out due to zero access for pilling plant to enter the watercourse. We then looked at the installation of a portable dam system, whilst we have used this system for a short period of time previously, on this occasion and for the duration required our engineers identified significant risks.  Kaymac engineers looked at historical river level data for the site for the months of August, September and October in previous years detailed the amount of days per month on average that the level would overtop the proposed portable dam system and then following that event, the number of days that the river would remain higher than 0.5m, preventing recovery and reinstallation of the dam. In this event, the membrane could potentially become damaged and need replacing.   The case of a flooding event would incur very high cost implications and a significant delay to the programme of works.

Engineers concluded that the dredged sand dumpy bag option would be much more robust, and a temporary works design could be carried out to show that it would be suitable to withstand a greater water depth than the portable dam option.  Over a 60m length, approximately 788 bags were required which had to be lifted with long reach excavator into the watercourse. This system did take longer to install and remove than the portable dam but removed a large portion of the risk highlighted.

Creation of a dry area was successfully achieved on budget and to program. Feedback from the client was positive and described Kaymac operatives as ‘Star performers’. 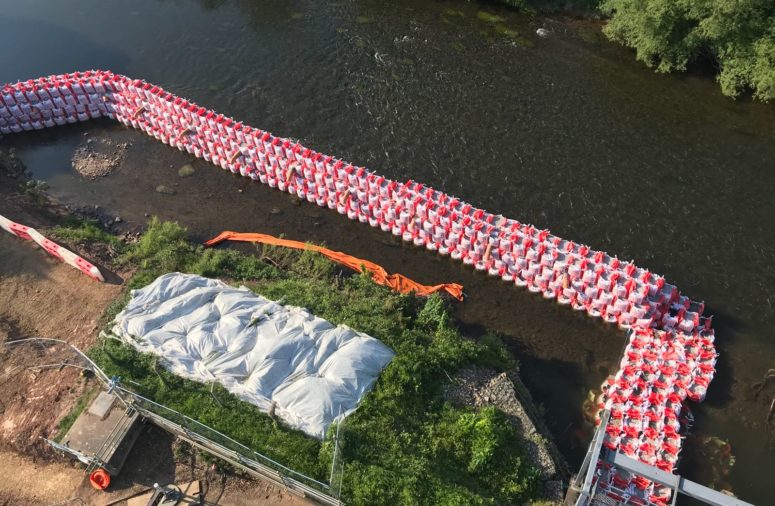