Kaymac surveyed Primrose Bank culvert; the findings revealed that the culvert was in poor condition. The structure had suffered from a collapsed section of the masonry abutment with an area of scouring within the opposite abutment. Large areas of open jointing and minor areas of missing masonry were noted throughout the culvert. A steel corrugated pipe section located downstream of the structure identified severe erosion with no invert, leaving a voided area below.

To repair the structure, in the first instance, Kaymac operatives installed an over-pumping system through the length of the culvert to create a dry working area.

A 1.8m diameter HDPE pipe was sourced and cut in half to slip-line along the area of collapse and scouring. A temporary acrow and timber propping system were developed to support the soffit and prevent the pipe from moving during the concrete pour.

When the propping system was in place, the team carefully removed the silt build-up bed material from the invert, allowing the new pipe to sit precisely. Temporary formwork shutters were installed upstream, and downstream of the newly placed pipe culvert in readiness for the concrete surround pour.

A suitably designed concrete mix was carefully pumped into the shuttered area, ensuring that the area below the pipe was filled and no voids were present. Concrete was then pumped to both sides of the pipe, filled to the required level and benched into each abutment to eliminate any collapsed masonry or areas of scouring.

When the concrete was cured, the temporary shutters and all temporary works were removed from the watercourse.

A suitable mortar was used to repoint the soffit of the culvert, and any areas of missing masonry were replaced with a sympathetic material and repointed.

An anti-washout grout was used to fill the voids along the corrugated steel section of the culvert. The grout was carefully poured throughout the invert, ensuring that all voids below the section of pipe were filled. Additional layers were added to create a new invert and finished by hand.

Finally, steel starter bars were drilled and fixed to the existing wing wall. A temporary shuttering system was erected to form a new concrete headwall and wing walls to protect the structure from future erosion.

All works were carried out under confined space regulations by trained personnel. The project was delivered successfully and within budget. 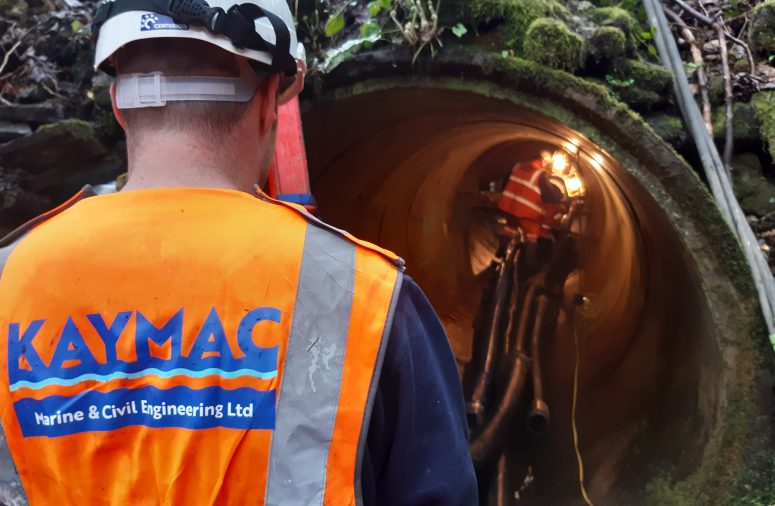