Kaymac was commissioned to assist in the early stages of design, supply and install 642m long sea outfall pipe. The original outfall pipe installed in 1964 had fractured in 2008, which caused treated effluent to enter the sea below the Mean Low Water Springs level, at a point inshore of the consented discharge point.

Kaymac’s experience in the marine environment allowed the design to be reviewed with regard to its ‘buildability’ and being able to source and transport the required materials to the site.  The design was altered so that the original scope of importing thousands of Tonnes of rock as backfill material could be replaced with the use of pre-cast concrete weight collars and mattresses that would be fitted to and around the pipeline, with the pipe being laid in a deeper excavation as to what was originally proposed- Thus providing a more cost effective and environmentally friendly solution.

We undertook the project via both land based and marine based operations.  With a tidal range in the region of 3.8m and with relatively little storage space on the beach, it was decided that the best option would be to import the pipeline, rather than attempt to weld smaller sections of pipe together on the beach.  This was also in the favor of the local residents, as to weld the pipe on site, would mean that the few access roads would not be kept busy with deliveries during the busy summer months.

The pipeline was sourced fabricated and delivered from Norway in its entire length to Fishgaurd Harbor where 200 No. Precast concrete collars along with sinking vales on each end of the pipe where attached.

Once all beach excavations and proprietary work was complete the pipeline was towed into position and sunk against the clock in one tide. The sheet piles were then removed and he trench backfilled. This was a tricky project that required meticulous planning execution, but despite the difficulties faced the project was successfully delivered to program and under budget. 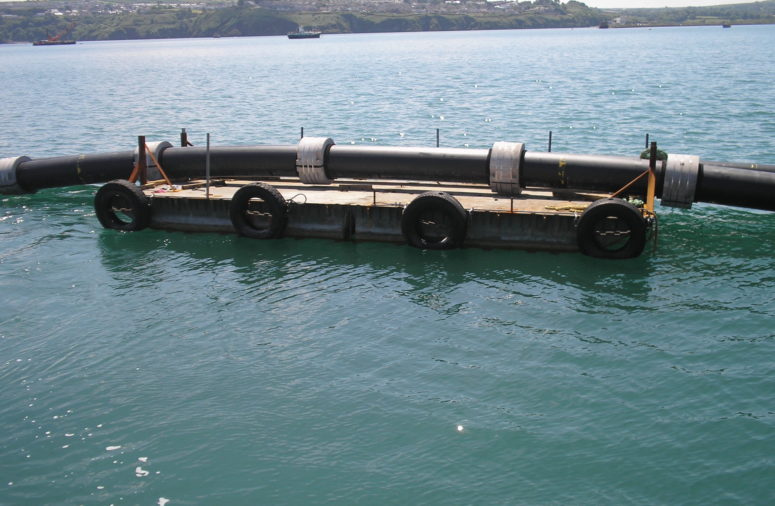