Nantgaredeg pumping station is situated approximately 1.8km south west of the village of Nantgaredeg, Dyfed.  The pumping station is located on the south side of the river and supplies Capel Dewi water treatment works, for which it takes its supply adjacent Afon Tywi.  The intake area of the pumping station is currently undergoing extensive renovation, with new plant and equipment being installed and tested on site.  The Afon Tywi can have high flow rates following sustained rainfall, with an average discharge of 45m3/s.

During the testing of the newly installed Hydrolox screens, the client identified that the screens were being prevented from sitting correctly within the steel chases and were not correctly aligned or level.  Kaymac were instructed by the client to visit site and carry out an initial dive survey to determine the problem and offer a solution.  During the inspection, it became evident that there was a large build up of silt and debris along the invert and within the existing guide chases that was preventing the correct alignment of the screens.

Kaymac proposed to remove the silt and debris through diving operations, using dredging pumps.  The pumped effluent would need to be contained and not allowed to disperse downstream so that to prevent a pollution incident.  An area on site was identified as a suitable area for a potential stilling pond and NRW were invited to site to discuss the proposed method of working.  Once confirmed as acceptable, Kaymac carried out the de-silting works over a 7 day period and then assisted with the correct alignment and reinstallation of the screens.  Following this work being carried out, it was suggested by the client that on projects involving the installation of Hydrolox (or similar) screens, that a Kaymac dive team be in attendance to ensure that the screens are installed accurately, with the dive team being on hand to carry out a completion survey beneath the water line and also being able to remove any material that could foul or damage the screens during the installation process.

A number of months later, Kaymac were instructed to return to site to carry out adaptations to the existing trash screens positioned on the river side of the Hydrolox screens.  Underwater cutting and burning operations were carried out to undertake these adaptations.  These operations were planned and conducted in a manner that would not cause damage to the new Hydrolox screens through assembling and fitting protective shrouding through diving operations.  The screens were modified and a dive survey confirmed that all elements of the screens were installed correctly and flush to the invert. 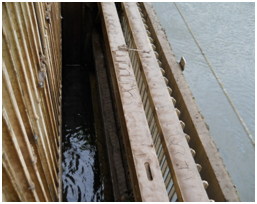