Following a principal inspection on the structure, severe structural damage was recorded to an underlying culvert which runs diagonally beneath the tracks at Magor, Newport.  There were large voids confirmed circumferentially around the face of the structure.  Kaymac were commissioned to visit site and propose a solution to strengthen the structure and prevent any closures of the track.

Kaymac proposed to drill and fix temporary grout injection points along its length, which would then be used to pump grout to fill the voids.  The injection points were fitted with ¼ turn valves and pressure gauges which were used to ensure that the voids were filled entirely.

To gain access into the culvert and also minimize the risks of any pollution incidents as a result of the works, the watercourse was diverted through a temporary sand bag bund and the opening/closing of various stop logs along the water’s route.  This was carried out in accordance with the licence agreement between Kaymac and NRW & Caldicott Wentloog Levels IDB.  The culvert was then cleaned of debris and any ballast which had fallen through from the track level as a result of the passing trains.  Due to the access restrictions, this was carried out using hand tools.

Once cleaned, the injection points were drilled and fixed to the structure at 1m centres (at the 8, 10, 12, 2 and 4 o’ clock positions along the length).  Once fixed, the joints of the entire structure were cleaned out and re-pointed using a marine based mortar, so as to ensure that once the grout was pumped into the voids, it could not escape through the open jointing.

The jointing was left to cure over a 48 hour period and then the pumping procedure was carried out to ensure that any voids behind the face of the structure were filled.  The pumping was carried out until the pressure on the gauge was shown to remain constant. The valve was turned to the closed position and if the pressure on the gauge remained constant, then it could safely be assumed that the void was filled.  If the pressure decreased, the pumping was continued until it remained constant.

Upon completion of the pumping operations, the injection points were cut flush to the face and then filled with the marine based mortar.  The site was then demobilized and the watercourse re-instated. 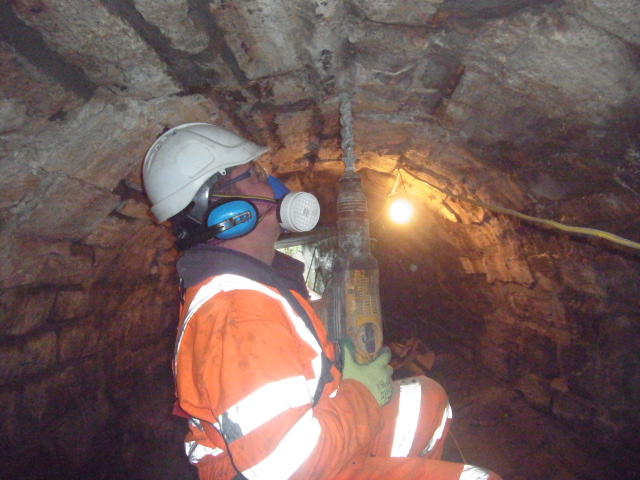