The main works comprised of stabilisation of a tidal revetment slope at the north-west corner of Sharpness Dock, at the mouth of the Gloucester & Sharpness Canal. The slope exhibited signs of movement in the form of tension cracks at the slope crest along a tarmac access road and further cracks on the revetment itself. This movement was understood to be ongoing at the time of inspection.

The extent of slope that required stabilization was approximately 60m long, including a 33m long section requiring additional vertical micro-pile supports to the concrete ring beam at the crest of the revetment. The slope angle was approximately 35º and was covered by concrete mattresses which were installed approximately 3 years earlier by Kaymac.

Kaymac firstly core drilled the top concrete beam in order to install vertical micro-piles which helped prevent the mattresses from slipping further during the works.  Once the vertical piles had been installed, they were filled with grout mixed on site and installed using a Putzmeister pump stationed at the top of the revetment, away from the watercourse.

The TEI Rock Drill was then fitted to a long reach excavator, which allowed the installation of the Ischebeck Titan anchors into the revetment at the required design angle.  The rig was remotely controlled by Kaymac staff.

Once installed, acceptance tests on selected anchors were carried out in accordance with the design requirements and all were found to be to specification. 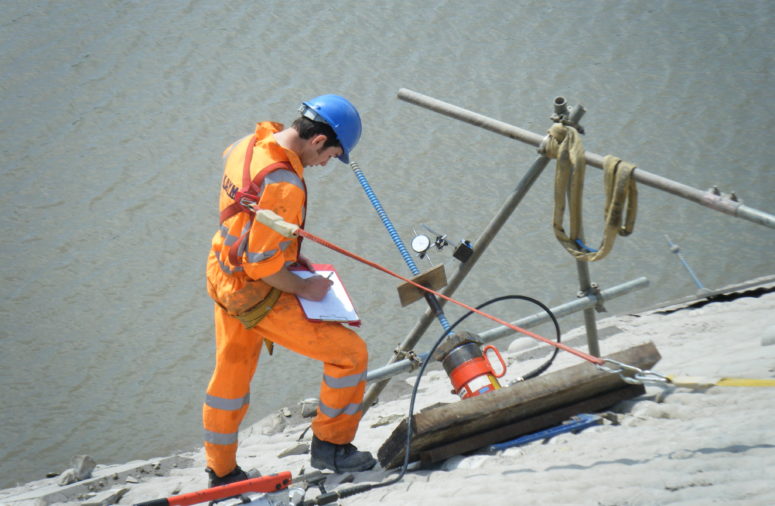