Following inspection of the under-bridge of the Afon Pandy single span masonry bridge carrying the railway line over the river Cwm from Newtown to Machynleth, it was identified that masonry repairs and improved scour protection works were required to ensure the safety of the structure.

During the winter months, the river flows have damaged the various scour protection system installed by others previously.  Kaymac were commissioned by Amco Rail to install a new thick reinforced concrete invert throughout the structure to protect from scour.  Re-pointing and stitch drilling works were also required to the abutments and archway of the structure.

As the works involved disturbing the existing bed material and pumping concrete into the watercourse, there was a danger of harming the surrounding environment.  Kaymac worked closely with Natural Resources Wales to plan the works to ensure minimal impact on the environment.  The river is also abundant with wildlife and as the works were carried out near the spawning season, there had to be a pass constantly open to migratory fish.

It was planned for the river to be over-pumped to ensure a dry working area for the works.  A temporary bund was installed at the upstream face of the structure and migratory fish pass was installed.

Once installed and the working area had been de-watered, the excavation works began to remove the bed material to the formation level.  The works were carried out in two halves to ensure adequate access for the excavators and dumpers.

Kaymac had two teams working 12 hour shifts per day (day and night working) to ensure that the tight programme was met.  The formation level was checked by the engineer and the steel reinforcement and timber shuttering was installed to the design requirements.

The concrete was pumped into the shuttering to create the first half of the invert.  As an NRW requirement, stone was placed by hand into the concrete with the aim of it helping to reduce the flows when the river was re-opened.  Once the first half had cured, the above was repeated to complete the scour protection works.  Plinths were also installed both upstream and downstream to protect the foundations of the structure’s wing walls.  The project was completed successfully during a period of very poor weather and high river flows. 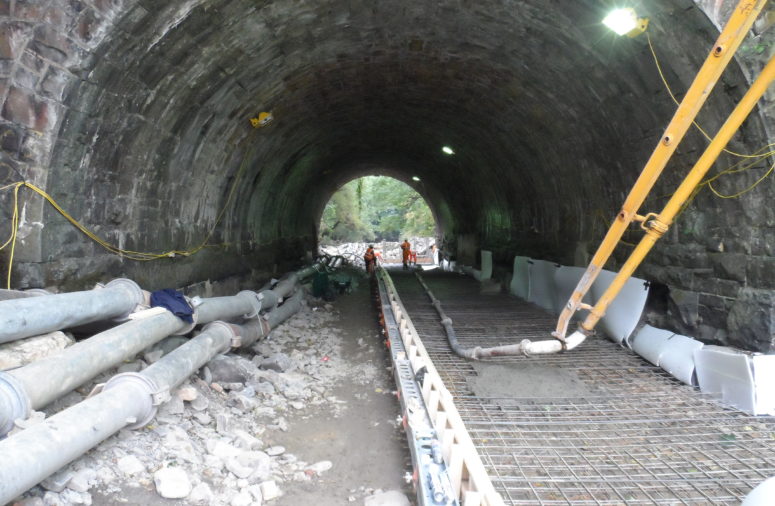