Kaymac was contracted to carry out Scour Protection Works to Structure DCL/40 Cherwell on the DCL Line between Heyford and Didcot.

The project was part of a Network Rail CP5 programme of works to upgrade infrastructure along the LNW route and where possible, enhance structures to higher specifications and standards. Kaymac were contracted to carry out the Scour Protection works to DCL/40 Cherwell.

The structure comprises of two 4 brick ring arches with a supporting substructure of a cut water pier masonry abutments and wing walls that was constructed in 1848.

Kaymac mobilised to site and Environmental Protection Measures were set up downstream. A temporary bund was installed to divert the flow of the water through the North Span, and extended the central pier upstream with a bunded area within the South Span. Once the bunded area had been created, the South Span was then dewatered and a fish rescue was carried out.

Stone was placed, compacted and reinforcement was installed to design specification. Formwork was erected and concrete was placed in three pours – base, ramps and upstands with a static pump.

Following completion of the scour protection works within the South Span, the temporary sandbag bunds upstream and downstream were moved to divert the flow of water from the North span through the newly surfaced South span. A clean stone ramp was then installed up to the river and a piped causeway was installed in the river to allow access to the North span.

With the Environmental Protection Measures still in place downstream, the North Span was dewatered and a fish rescue was carried out.

Upon completion of the works, the temporary works and environmental protection measures were recovered from the watercourse and both spans opened to the river flow.  The site was then left in a clean and tidy condition and all labour, plant & materials demobilised. Despite high rainfall and fast flows Kaymac successfully upgraded the safety of the structure on time and to budget. 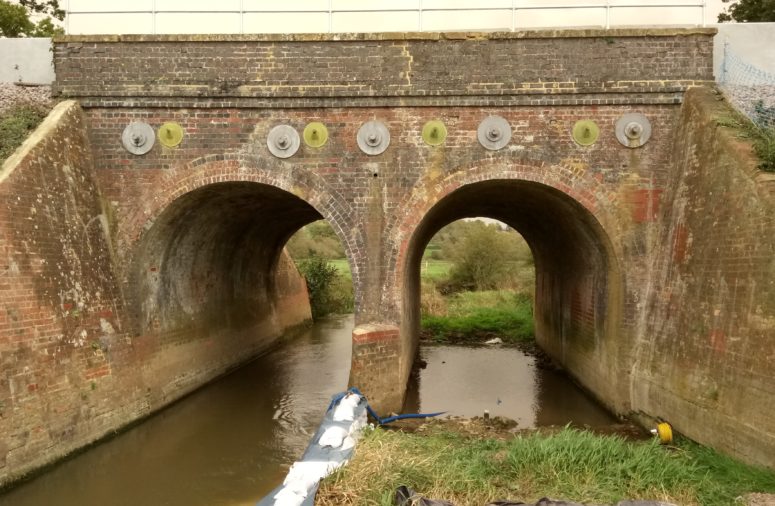