Following the atmosphere test, each end of the culvert had to be cleared of any vegetation and debris, bed material removed and discharge pipes where installed within the culvert to over pump, creating a dry working area. The pipes were installed through the culvert and secured to the existing structure with temporary fixings. Temporary dams where used at the upstream and downstream ends of the structure to contain and prevent any pollutants from contaminating the watercourse. Operatives could then start the pumps and begin over pumping the water through culvert.

Local excavation took place at either end of the culvert, formwork placed at the downstream end and at the end of section 1 and concrete poured to begin to form the new reinforced concrete Invert.

Due to limited access, the concrete was dispensed from the wagon into wheel barrows and transported to the culvert.

Once the first section was complete, the concrete was allowed to cure before striking the temporary formwork, re-erecting at the end of the next section and pouring concrete. This process continued until the concrete invert and training walls had been completed.

Once sufficient curing time had elapsed on the final section, the surface of the concrete was cleaned of all cement fines using a LP water jetting pump to prevent pollution when reopening the watercourse.

The temporary dams were then removed and all associated materials recovered from site.

During the works, a Gabion Basket failure was identified downstream, and while mobilised on site we were instructed by the client to repair the gabions. We used Sprayed Concrete (Shotcrete) to repair the damaged area and placed rock armour to prevent any further damage. 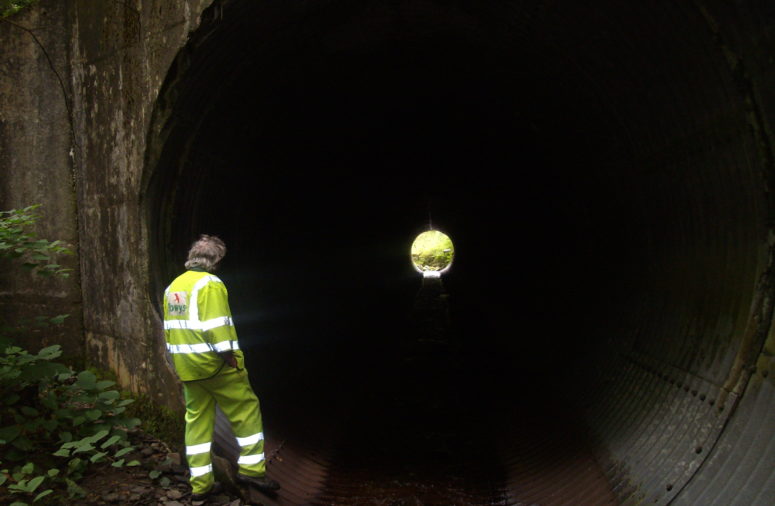